You might have heard a lot of talk about Microsoft® 365 recently. But what is it? And how is it different from regular Microsoft Office? In this free guide, we’ll break it down for you so you can get a better idea of what’s included with this powerful software and how you can apply it to your law practice. We’ve included a short excerpt below:

In this eBook, you’ll learn: 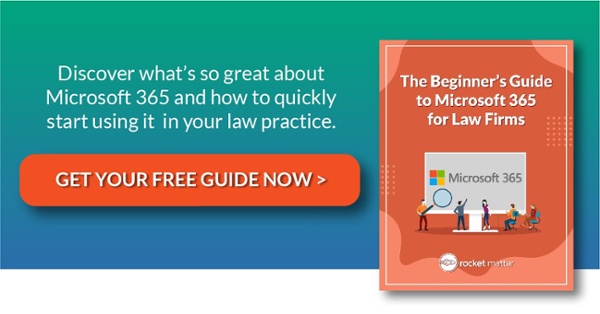 Excerpt- The Beginner’s Guide to Microsoft 365 for Law Firms

What is Microsoft Office?

Microsoft Office is the original collection of productivity software published by Microsoft way back in 1988. The bundled suite of applications originally included Microsoft Word, Microsoft PowerPoint, and Microsoft Excel. The collection has since grown to include Microsoft Outlook, Access, OneNote, Publisher, Project, Visio, and other
applications.

This software was initially designed to be installed locally on PCs. Eventually, Microsoft built a Mac version, too. Locally-installed applications are not automatically updated, meaning you have to keep purchasing the latest package every time a new version becomes available.

Microsoft 365 (formerly known as Office 365) differs from regular Microsoft Office in two ways. First, instead of a one-time fee, you pay a subscription to license the software. Second, Microsoft 365 is cloud-based and accessible on every one of your desktop and mobile devices.

Many Microsoft 365 plans also include the desktop versions of the latest Microsoft Office applications so that you can still work while not connected to the Internet. You can install these programs on multiple devices (up to 5 PCs or Macs.) If you have a plan that includes both cloud-based and desktop software, you’ll receive automatic updates for each application (even those on your local machine) so that you’ll always stay up to date.

How is Microsoft 365 Cloud-Enabled?

When you use the cloud-based services of Microsoft 365, your documents and files are located on servers owned by Microsoft and managed remotely by them. (You can alternately store things locally on your computer if you choose.) Microsoft’s online storage is called OneDrive, and it competes with similar services such as Google Drive, Dropbox, and Box.

Storage in the cloud means less IT costs for you because you won’t have to maintain a server at your home or office. Because this infrastructure is located in the cloud, you can access it from any computer or mobile device with an Internet connection.

The setup is incredibly easy, and Microsoft 365 offers you step-by-step guidance to get your law firm up and running. Microsoft 365 is also highly scalable and can support everything from a one-person business to companies with tens of thousands of users. There are even plans that cater to schools and non-profits. Most law firms would fall under a Microsoft 365 Business Standard plan.

With Microsoft 365, you’ll save your firm a great deal of time and money. And just think about the benefits of having it integrate with a legal practice management system like Rocket Matter! With such powerful capabilities, you’ll wonder why you didn’t start sooner.

Want to read more about how Microsoft 365 can benefit your law firm?